We have recently  been lent some photographs of the village from over 100 years ago. One of the gems is this photograph of the Drayton and Muchelney Male Friendly Society which was dated 4 June 1913.  A delve into the local paper produced the write up below about the day. It looks as if the photograph was taken from the churchyard. Outside the pub you can see a car. 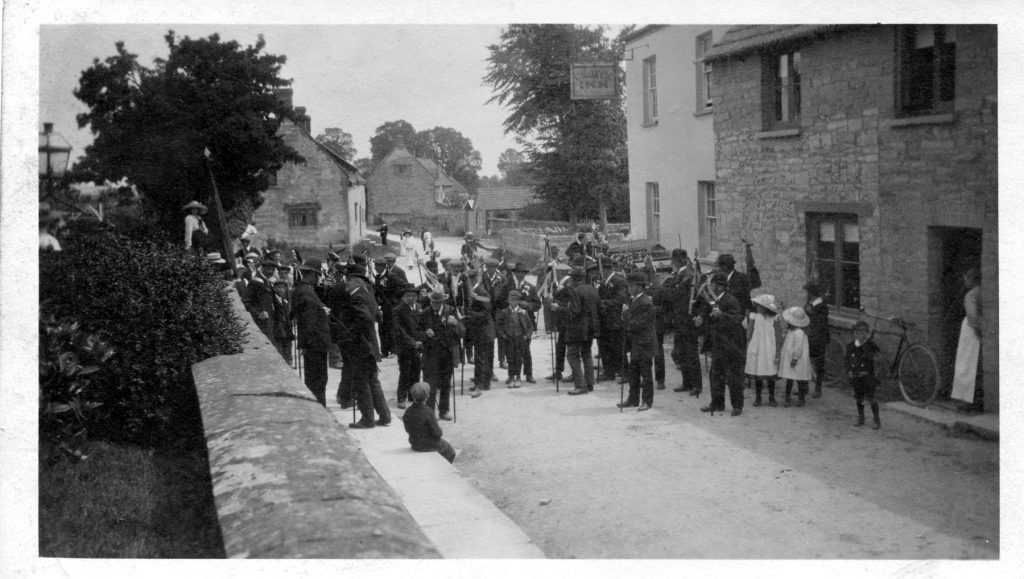 FRIENDLY SOCIETY FESTIVAL: The annual festival of the Drayton and Muchelney Male Friendly Society took place on the 4th inst. The role was called by the Secretary Mr J Purchase and out of a total membership of 60, 50 answered to their names. Subsequently, headed by the Society’s banner and the Langport Town Band, the members marched in procession through the village, paying calls at the principles residences.  A return was afterwards made to the Parish Church,  where the vicar, Rev FW Soames preached a sermon. After church the procession reformed and visits were paid to some of the principle residents. Shortly after half past one a return was made to a large marquee erected in the beautiful grounds of the Rookery, where the dinner was partaken of. Mr M Cely Trevilian, Treasurer of the Society presided. The customary toasts were proposed, including that of “Prosperity to the Drayton and Muchelney Friendly Society” by the Chairman. He stated that the members had paid in during the year £33 8s 11/2d. Three legacies amounting to£7 11s had been paid, which left a balance in hand of £23 17s 11 1/2d.