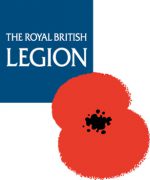 We pride ourselves in being one of the oldest Branches – if not THE oldest – of The Royal British Legion. The origins go back several years before the official establishment of the Legion itself and even before the end of the First World War.  On the evening of Friday 8 March 1918 a meeting was convened in the Old School Room, Curry Rivel, with ten old or discharged soldiers present, under the chairmanship of Major M Cely Trevilian.  During the meeting, the following resolution was proposed by Major Cely Trevilian and carried unanimously; “That we the discharged and demobilized sailors and soldiers present at this meeting, hereby formally establish a ‘Post of the Comrades of the Great War’.”  The first ‘Post Captain’ was Mr John Sligo and the first Secretary was Mr Henry Lang.  The young branch lost no time in getting started and, within ten days, the first Committee Meeting was held and the formation of a Club discussed.

Today The Royal British Legion provides lifelong support to our Armed Forces community – serving men and women, veterans and their families.  Immediately after the two World Wars the emphasis was on the continuation of the good comradeship that was so evident during and after these devastating conflicts.  Today the emphasis lies more on welfare and fundraising.  But let us not forget that since the end of the Second World War in 1945, British Servicemen and women have been killed and wounded by enemy action every year except 1968 and 2015.  The Royal British Legion is at the heart of a national network that supports our Armed Forces community through thick and thin, ensuring their unique contribution is never forgotten.

100 years after its formation, the Curry Rivel, Drayton and Fivehead Branch of The Royal British Legion is thriving with around 115 members.  But we need new members, particularly those of any rank who have served at least seven days or more in the Armed Forces – Regular or Reserve, and those who are in sympathy with the objectives of The Legion.

Membership costs £18 per annum.  You can join here http://www.britishlegion.org.uk/membership/become-a-member/ or email the Branch’s Membership Secretary, Gordon Balmer, at mullcott@icloud.com

Community Support.  Do you need help and advice?  Then we can point you in the right direction to obtain the support and assistance that you need. Please start the process by speaking to or emailing the Branch’s Community Support Secretary, Susan Willis, on 01458 250772 and at sueewillis60@gmail.com.

The Branch has a dynamic plan for enjoyable social events for members to raise money for the Royal British Legion.  Events this year in 2018 will be:

Details of each event will be sent to members of the Branch at least one month beforehand and advertised in the village newsletter.  Tickets can be obtained from any member of the Branch’s Committee.